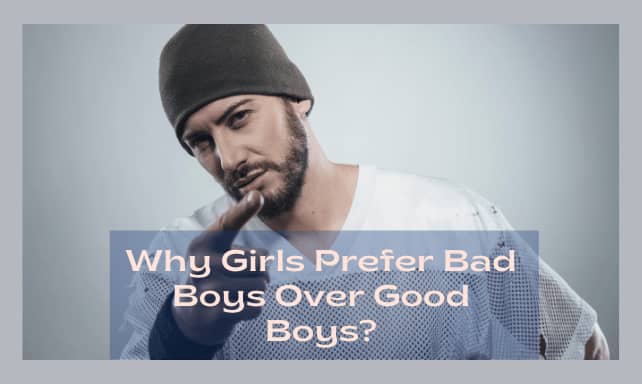 The truth about bad boys is they fit into all types of categories and backgrounds. They may be popular but they might also be introverted or shy. They could be intelligent but still, have trouble in school because they don’t care about their grades as much as being able to do whatever feels right at the time. There’s not really a standard set of signs, traits, or behaviors that make someone bad. In fact, it’s often how you define what makes someone good or bad.

A bad boy with a good heart, I think that is the absolute perfect every girl looks for. Who do we refer to as a bad boy? What makes a boy get into that category? And most importantly, why do women go crazy for bad boys?

This write-up has all the answers to your queries, so let’s get into the in-depth analysis of bad boys and their fascinating characteristics.

Now, this is one fundamental question that causes a lot of confusion amongst people, especially girls. What makes a boy terrible? What are the primary traits and signs that bad boys follow? Let’s know these nuances in detail.

A bad boy is not a person who has just spent a few years in jail and has nothing to do with what society thinks of him. Bad boys are neither someone who believes in dominating the fellow gender in various aspects of life. So ill mannerism or male chauvinism isn’t the synonym to bad boys; make sure to check that fine line.

Women fall for bad boys more often as compared to the ones that have a gentlemen personality. A part of the credit for this goes to the glorifying image created on screens by our filmmakers and other creative content curators.

So, let’s move ahead and talk about the common signs and traits possessed by bad boys;

1. They dare to own their actions

Bad boys are unapologetic, and they stay as authentic as possible. They own their actions, and they rarely step back from their actions. And this characteristic makes them look more attractive to women.

They say, and they do what they want to do to their life or their relationships. Regardless of what others might think, they are what they want to be, and that’s how these people leave a more noticeable impact on different human beings they meet.

You cannot easily judge their actions, and hence they happen to have unpredictable personalities. Because they do not act according to what society wants them to act like, they are probably the subject of discussion in every gathering.

People tend to talk about their actions, their attitudes, and their approaches towards different things. That’s how they are always a part of people’s conversation.

2. They happen to be super-confident and straightforward

A confident personality is way more attractive than otherwise. Confidence could reflect in a lot of ways, and it shows up in your body language, your speech, the way you dress up, and the way you put forth your thoughts.

Bad boys seem more confident than the good ones. They usually give a fist to everything around them, and they don’t care at all. And this is one trait that attracts women. However, in most cases, women hardly notice the cons behind that confidence; instead, they seem driven away by the style.

Besides this, bad boys are super straightforward. They keep their thoughts straight on the face of the person they refer to, and that makes them look rude.

However, they do not care what people think about them, and neither do they take any chance to explain themselves. They believe what they do is correct, and they don’t need to explain anything to anyone.

3. They are great strategists

Bad boys do not strategize their moves on papers; they instead have this trait in their personality. Therefore, they already have it in their blood to make a move that would probably succeed.

Women love how effortlessly bad boys make an impression on them. It is still not proven what makes bad boys so irresistibly attractive, but their traits win the situation for them.

Bad boys usually do not approach girls straight; they do that in their unique ways. Thus, this makes them popular among the group they spend time in.

Furthermore, these men are brutally selfish, and that too is taken in style by women. The selfish nature of bad boys makes them a topic of discussion among women, and they already acquire their unique place in different groups of women.

They already know what women like; they are aware that their attitude would kill (not literally) half of the women around them. And this gives them the confidence to be what they are.

4. Women feel more protected with them

Bad boys are men with an attitude that’s difficult to handle but know the difference; they are not jerks. Thus, bad boys make sure they keep their girls in the most protected atmosphere.

Women love the idea of being next to a guy whose shoulder they can lay their head on. And besides this, they love to be around someone who could even end up in a fight if required. Bad boys are good at it, and this is what women love the most.

Bad boys believe in less talking more performing. If you remember meeting a bad boy in your life, you’ll have that memory of him being silent most of the time, wearing that smirking smile throughout.

Bad boys talk less; they believe in talking through their actions rather than expressing everything in words. This attitude makes them different from other men and more popular among other boys.

Bad boys are called wrong for a reason, and there are several such reasons which make them look wicked because of their actions. Bad boys rarely apologize, and if they do it once, they will shout about it for the next two years.

This trait of bad boys is annoying, it might look attractive at first, but later, people find it rude and unacceptable.

They probably know that they hurt people with their actions, but they hardly apologize for their mistakes. Their attitude or maybe their ego is the reason behind this trait. And they hardly care if they lose a relationship in this course.

7. They have a stupefying dressing sense

Somehow, bad boys have a dressing sense that looks appealing to women. They won’t dress up like a gentleman; they neither do many experiments with their dressing. You might notice them wearing the same color to every event they visit, but they somehow manage to grab people’s attention wherever they visit.

Bad boys have a fascinating dressing sense. Their look makes their personality even more appealing. Women have collectively accepted that they like how bad boys dress, somewhere more loved than a gentlemen look.

Not just what they wear, but the way they carry themselves has its charm. Their hairstyle, or their bear styling, everything happens to look exceptional and more appealing to women.

Bad boys are not jerks!

They are the category of men that women fantasize about.

There’s a thin line between bad boys and jerks. Bad boys own their actions; jerks don’t. Besides this, there are more such differences; let’s look at this information crisply.

So, there’s a fine line between a bad boy and a jerk. Women need to differentiate effectively. Often, women are found to fall prey to these jerk men, and in this case, women end up hurting their emotions.

Jerks are often found acting like a gentleman in the starting phase, and once you start spending more time with them, they will probably show their natural face soon. Therefore, beware of jerks; you don’t deserve them for even one day in your life.